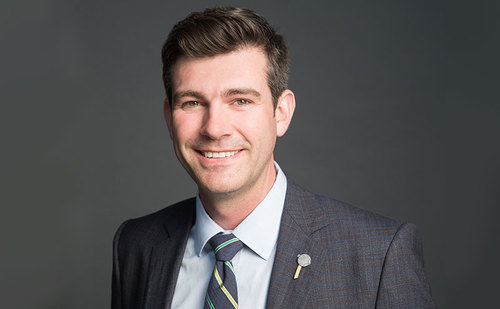 Mayor Don Iveson, (aged 39) is the 35th mayor of Edmonton, Alberta, one of the youngest, fastest-growing cities in Canada with emerging economic strengths. Mayor Iveson has led Edmonton’s transformation into a more uplifting, resilient, and globally competitive city.

1. What’s a typical day for the Mayor of the 6th largest city in Canada?
Edmonton has been one of Canada’s fastest-growing cities in recent years, and its 1.4-million-strong metro population now makes the Edmonton Metro Region Canada’s fifth-largest. Whether it’s chairing a city council meeting or pitching Edmonton on a mission to Asia, I am fortunate to be mayor of one of the country’s most dynamic cities that is home to Canada’s youngest population, welcomes investors and newcomers from around the world, and offers an unparalleled quality of life.

2. With a the relatively young demographics of Edmonton, what advantages do you see for your city?
Our young population means significant spending power, which enables them to access and experience the world and, in turn, fosters high expectations of their home city. Edmonton is home to a superb array of post-secondary institutions, making us one of the most versatile and most educated workforces in the country. Our creative, entrepreneurial spirit continues to drive economic growth. Housing prices that remain in reach of Edmontonians contributes to our growing family-friendliness. This is why so many Edmontonians move back after years away from our city. It’s also the main reason my wife Sarah and I chose Edmonton after exploring so many other options, as the place we would build our life and raise our family.

3. What are your mid to long-term goals for the Capital city of Alberta?
Our recent economic downturn has enabled us to focus our efforts on transforming into a resilient, increasingly diversified and innovative economy. Indeed, our residents, businesses, researchers and community leaders are already working on this — growing our exports and investments, cultivating our talent and embracing innovation. I am focused on growing an opportunity economy, building a more family-friendly inclusive city, and accelerating our energy and climate leadership.

4. How are the business ties between Edmonton and Hong Kong currently?
Our two cities’ cultural, tourism and educational ties are key to growing business ties, which are increasingly enabled by the Alberta government’s official presence in Hong Kong. As cities of entrepreneurs and risk takers, our ties can only grow. Edmonton downtown’s $5 billion growth now underway, seven active post-secondary institutions and Canada’s most active aerotropolis development — these are catalysts for enhanced ties between Edmonton and Hong Kong.

5. What opportunities do you see between Edmonton and Hong Kong?
Hong Kong is an exciting destination for Edmontonians — examples include post-secondary alumni ties, family ties (like yours truly), investment capital and as a gateway to mainland China. When Edmonton hosted the world’s first climate change conference for municipalities, Hong Kong’s four-person-strong delegation demonstrated its leadership and climate-change work. Edmonton real estate developers have been visiting Hong Kong to highlight lucrative investment opportunities in ongoing downtown renaissance.

6. What are some of your impressions of Hong Kong during your current visit here?
With extended family members from Hong Kong, it is always a pleasure to return here and marvel at its skyscrapers, tantalizing cuisine and public transportation system. My recent meeting with Environment Undersecretary Tse Chin-wan highlighted Hong Kong’s leadership in combating climate change from which we can learn — notably district energy usage and energy labelling program.

7. Please suggest some ideas on how Hong Kong could further improve its business ties with Canada.
One of North America’s most dynamic downtown sports and entertainment districts is a significant catalyst in Edmonton’s economic development which has already attracted Hong Kong investors’ attention. As the primary gateway to China, Hong Kong is well-positioned to be a pipeline for increased Canadian business ties. For example, the Hong Kong-based Canadian Consul General’s upcoming visit to Edmonton will add momentum to those increased ties