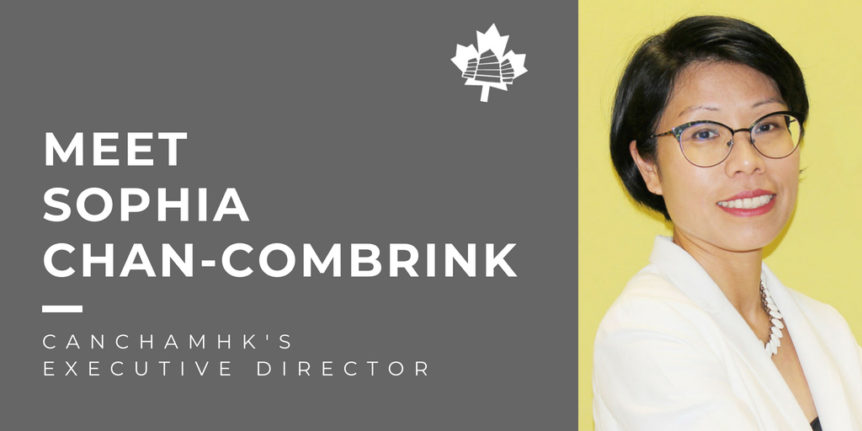 Hong Kong, July 18, 2018 – The Canadian Chamber of Commerce in Hong Kong has officially announced the appointment of Sophia Chan-Combrink as the Executive Director of the Chamber. As head of the Chamber’s Secretariat, Ms. Chan-Combrink will work with the Executive Committee as well as various other committees to create and deliver programs and services that bring value, access, and engagement to members of the Canadian Chamber.

Before she joined the Chamber, Ms.Chan-Combrink had served as the Head of Education and Society for the British Council for a tenure of six years. Her responsibilities in that role included the provision of strategic leadership to the British Council’s education work in the East Asia region as well as in Hong Kong. Prior to that, she held over twenty years of experience working in Canada’s private, and public sectors and abroad.

Her previous appointments have brought her to work alongside reputable organizations such as the United Nations Environment Program, Environment Canada, and Earth Day Canada. In her former roles she has helped form and advise strategic directions regarding social policy, and has managed and led several initiatives.

She has overseen a diverse set of projects ranging from the field of social innovation to that of gender equity. She is a graduate of the Commonwealth’s Emerging Leaders Asia leadership programme, and obtained her Master’s degree in Environmental Studies from York University, Canada and her Bachelor’s in Environmental Sciences from the University of Toronto, Canada.

Ms. Chan-Combrink has direct experience advising government institutions and corporations on policy-related issues. Most notably, she has worked closely with the Hong Kong Chief Executive’s office to help shape the Honorable Carrie Lam’s agenda for her first official meeting with the UK’s Secretary of State for Schools. Furthermore, she has provided platforms for the likes of the First Minister of Scotland’s office to speak on gender parity in politics.

Ms. Chan-Combrink is fluent in English and conversational in Cantonese and French. With over 10 years of hands-on managerial experience at the supervisory level at public organizations and environmental NGOs, she has direct experience working with and advising corporations and governments on policy-related issues.

About the Chamber
Founded in 1977, the Canadian Chamber of Commerce in Hong Kong is a proactive, non-government body that provides an extensive networking platform for some 1,000 members with business interests in Canada, Hong Kong, Mainland China, and the broader Asia-Pacific region. The Chamber is one of the largest Canadian business organizations outside of Canada, one of the leading and most active international chambers in Hong Kong, and an influential business group in Asia-Pacific. Like Canada itself, the Chamber’s strengths are built on the diversity of its members who range from blue-chip Canadian and well-known Hong Kong corporate names through to local startups.